How old are you? 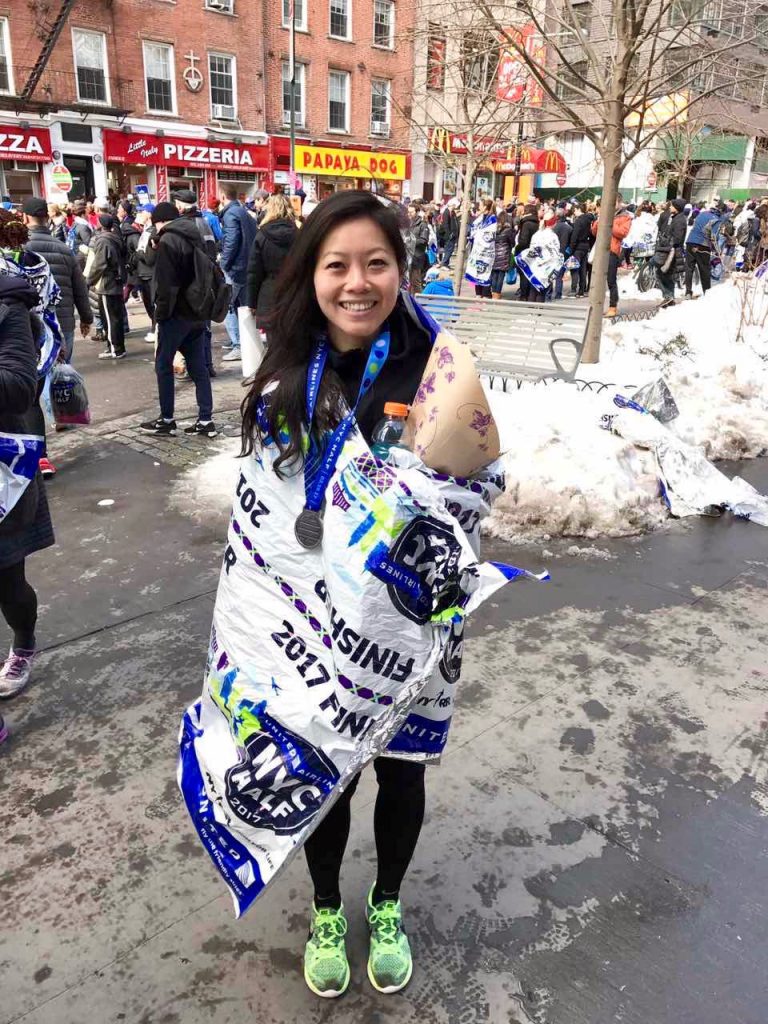 How long have you been running for? What made you start running?

I started running in Middle School when I joined track and field. I was more into softball in High School but with the stresses of college I started to run again. I’ve always enjoyed running because my parents were really athletic when they were young, and they always encouraged my brother and I to be active.

How often do you run? Where’s your favorite route or place to run?

Right now I run about 3-4 times a week to condition myself before I start marathon training, which actually started this week! I like running in parks and along the FDR, but since the weather has either been scorching hot or freezing cold, I’ve been running a lot on the treadmill in my gym.

How many races have you completed so far? Can you share about a particular one, and what makes that race stand out in your memory?

Aside from a couple 5Ks, I’ve really only ran in 2 official races: the Rock n Roll Brooklyn Half, the NYRR United NYC Half and NYRR Queens 10K. They were all memorable to me because the Brooklyn Half was my first half marathon ever and the NYC Half because it was in the borough and city I was born and raised so that was exciting! The 10K was also my first and I finished in sub60 so that was pretty awesome!

What or who inspires you to be active?

My family inspires me to be active because many of them are, and they set great examples for me to follow. My parents used to do gymnastics and play badminton on a varsity level and that’s really impressive. My brother used to do track with me in school and he would make me chase him so that I would get faster, or so he claims. Haha. And of course there’s my husband who runs vicariously through me, but we do hit the gym together often- which is incredible because laziness is contagious and I’d hate to be that person that stops going to the gym or running because my significant other isn’t as active.

Do you train? If so, what is it like? How often and what’s involved in your training? Do you prefer to run with others or by yourself?

As I mentioned, I’ve been conditioning since the half marathon in March to start marathon training in July. At the time I was running 3 days a week and doing weight training on 2 days, with 2 off days to rest. That’s similar to the marathon training plan that I’m beginning, except the runs are much much longer. I usually prefer to run by myself because I think it’s difficult to run with someone and adjust to their pace. If I run ahead of them, I’d feel bad leaving them behind and vice versa, I wouldn’t want to hold them back.

I find that chewing gum while running or playing sports works best for me. One, because it helps with my anxiety and two, because if I chew too fast, that means I’m breathing fast and then my jaw gets tired so I’m forced to relax and breathe easy, haha.

How do you prepare for a race the week or night before?

I’m actually terrible when it comes to race preparation because I have race week jitters and I can’t eat or sleep. When I do eat, I try to eat something light and have my last meal before so I have ample time for carbo loading and most importantly, unloading. Common to most runners, the week leading up to a race is a lighter week where you don’t run as much (or at all) and that makes me feel extremely unprepared, but I’ve learned that resting and stretching at this time is crucial to a good race. 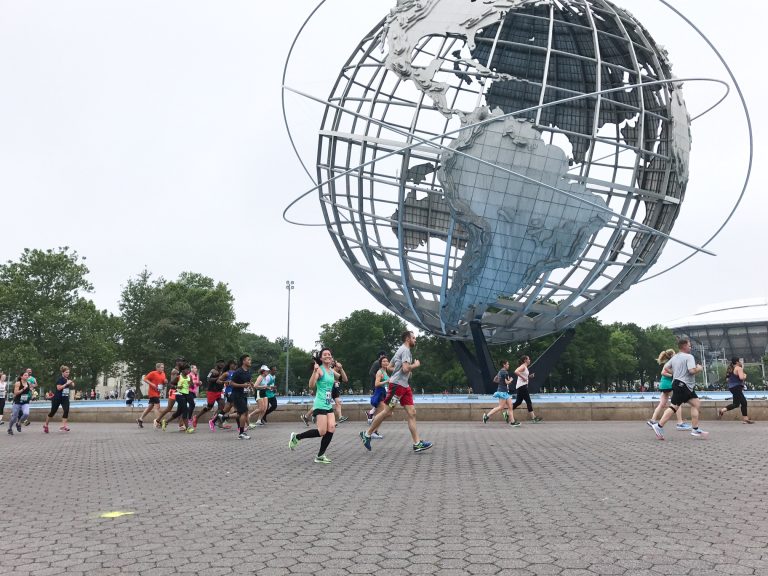 What running shoes/brands would you recommend or like to wear for your races?

The only brand of running shoes I’ve ever tried is Nike and my first pair of running shoes were actually Nike Air Max Plus. I ran in them for the 3 years that I was in track and I was OBSESSED with them. One day I saw a hole by the toe box and instead of buying another pair, I had to bring them to a shoe…smith? and get them to sew it back together. There’s nothing like a nice, worn out running shoe that’s been broken into!

Do you listen to music while you run? If so, what do you like to listen to?

I do listen to music while I run and they definitely range. My playlist has a mix of Today’s Hits and worship songs. I’m not sure if everyone has a couple of worship songs thrown in their playlists, but when I’m on mile 12 and “Great Are You Lord” comes on, I’m like thank you God because in fact, “it’s your breath in my lungs” cause I’m about to collapse, haha. But in all honesty, the changes in music help me pace myself at different segments of the run and it helps me stay in tune with my body.

How do you think running has affected your body or life?

When you run long enough, you realize that your arms are pumping and they get tired, your core is tight and your legs are sore. It’s really a full body workout. Running has disciplined me so much because when you train for a race, you have to commit to the time and dedication it takes to get there. You don’t just wake up one morning and say “You know what, tomorrow I’m running a half marathon.” Maybe for some people it’s that easy, but for most of us it’s not. So to be able to set your mind on something and train for it (especially when you’re only training by yourself) is a great reflection of self discipline. Not to mention, running is a great outlet for stress relief!

I love how running is such a well rounded activity for your body, and how you can learn so much about yourself on a run. When you don’t feel like running, there’s only you and God that’s helping you push through it. I’m not sure what I like least about running, but I do hate that I don’t love foam rolling yet because the rare times that I did use a foam roller after running, my lower extremities felt great but my upper extremities were burning!

As a runner, what is a must-have product you have come across? Why or how has it helped you?

I actually can’t take credit for this, but one of my must-have products that my husband got me are these knee high Nike compression socks. I think it really helped my blood flow on race day and I try to run a lot in them.

What’s your favorite recovery meal/food after a race?

I don’t have a favorite recovery meal/food after a race because half the time I still don’t feel like eating but if I had to pick, maybe a burger? Anything matcha? Hot milk? Those are my favorite things on a daily basis so I definitely won’t turn them down after a run, haha.

Has running gotten easier for you? What’s your next goal(s)?

Running longer distances have gotten a little easier for me but I know that comes with endurance, which can only be built by running more. As cliche as it sounds, the more time you put into running, the more endurance you get out of it. Don’t get me wrong, there are still days when I’ve already ran 10 miles and want to keep going, and there are days I don’t even want to run 1, but you just need to get past the laziness and just do it. I’m actually running in the 2017 TCS NY Marathon in November as a member of the NYRR Team for Kids and that’s my first marathon ever, so that’s still mind blowing for me. I don’t have an anticipated finish time, but it’d be nice to surprise myself!

To stay active, besides running, is there anything else you’re thinking about trying soon?

I usually like to stick to what I know. In the past I’ve done yoga, Pilates and kickboxing. These can all be incorporated with weight training during marathon training. But I think the one thing I’ll miss most this year would be football since I can’t afford any injuries prior to the marathon.

What tip(s) do you have for someone who might be considering to sign up for their first race or anyone who is new to running?

As the Nike slogan says, just do it! There’s nothing more satisfying than to cross the finish line and know that your hard work has paid off! It’s scary at first, but literally all it takes is putting one foot in front of the other and you’ll get to the finish. You won’t get anywhere if you don’t move, and it’s a great way to stay fit!

You’re running the 2017 TCS New York City Marathon this year for the first time! Tell us more about that. How excited are you?! What are your thoughts or concerns? How are you preparing?

I am! It’s been pretty surreal the past couple months leading up to the training, but now that it’s starting, it definitely feels real! I’m excited, but I’m super conservative with my expectations because until I cross the finish line, I’m not sure how my body would feel during or after the race. I just hope I finish! I’m trying to follow a 16 week marathon training plan from a few different plans just so I get the best of them all, but I’ll be altering it a little to fit my schedule- which I think is the most preparation that needs to go into training for a marathon because time isn’t always a luxury in the hustle and bustle.

So you’re running for a charity? Awesome! Why did you pick Team For Kids and how can others help you reach your goal?

I picked Team For Kids because I’ve always had a heart for charity and missions. I’ve gone on a couple of national and international missions trips with my church in the past but for this marathon I wanted to focus on the children in my immediate community. Seeing how much running impacted my life in Middle School, I wanted to provide kids with the same opportunity and more! The fundraising goal for this charity is $2620 and currently, I’m at $1626. I have until October to raise the funds and I’m more than half way there with the help of some very generous donors! Of course, if there are others out there with the heart to give, they are more than welcome to partner with me!

Cindy, you are truly inspiring. Keep up the great work and training. Thank you for running for a good cause and supporting Team For Kids – you got this!

Please consider supporting and partnering with Cindy by donating to her RUNWITHTFK fundraising page.

[All photos used in this post were provided via Cindy]